By David Wood for MailOnline

Jose Mourinho swept the ‘plastic pitch’ and match officials after Norway’s Bodo/Glimt cruised to a 2-1 victory over Roma in their Europa Conference League quarter-final first leg on Thursday.

Defender Gianluca Mancini left in the second half with a suspected knee injury.

And late goals from Brice Wembangomo and Hugo Vetlesen capped a dismal night for the Italian side.

“Both goals were from a set piece and a deflection. We also score a lot of goals from set plays, but it’s a good one to score, a bad one to concede. The first goal was ridiculous,” Mourinho said at Sky Sport Italia.

“To be honest, what worries me the most is Mancini’s injury. It’s a concern, it’s something caused by playing on plastic turf.

“We lost 2-1, we have the second leg to play at the Olimpico in front of our fans and I have no problem saying now that I think we are the favorites to reach the semi-final. 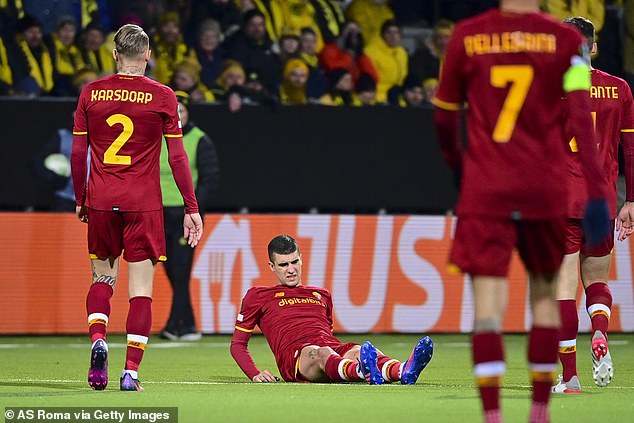 “I have total confidence in my players, in the stadium, in the support of our people. Obviously Bodo/Glimt are a difficult team, but I’m also convinced that we will have a good referee and assistant in the second leg.

Bodo/Glimt, who inflicted a stunning 6-1 defeat on Jose Mourinho’s Roma in the group stage, fought back after a goal to beat the Italian giants again.

Lorenzo Pellegrini put Roma ahead just before half-time as the visitors looked to extend a nine-match unbeaten streak in all competitions.

But Ulrik Saltnes equalized for the home side before the hour mark.

Pellegrini had an effort ruled out for offside 15 minutes from time and Roma suffered another setback in the 89th minute with Hugo Vetlesen’s header. 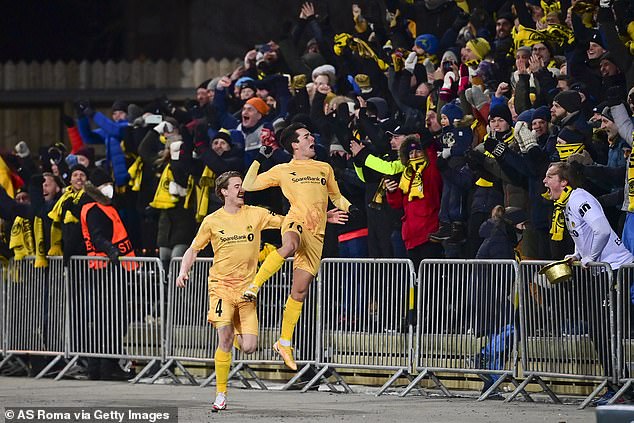 In other encounters, Ibrahim Traore’s 95th-minute equalizer for Slavia secured a 3-3 thriller at Feyenoord after Marcos Senesi’s goal and a free kick from Orkun Kokcu appeared to have secured a comeback victory.

Luis Sinisterra gave the hosts an early lead but Peter Olayinka and Yira Sor responded either side of the break.

OM seemed to be heading for the last four after a fine volley from Gerson and a superb finish from Dimitri Payet which led them 2-0 at the break.

However, a sweet finish less than three minutes after half-time substitute Omar El Kaddouri’s break changed the tone of the encounter.

Superb saves from Alexandros Paschalakis then kept the hosts at bay