BRAZILIAN WINGER GABRIEL Ramos ended Derry City’s faint hopes of advancing in the UEFA Conference League with goals in each half to send Riga into the second round.

The 24-year-old from Rio proved a thorn in the side of City’s defense on both legs after also scoring in the 2-0 win at Brandywell last week.

Derry faced a daunting task as they tried to make history in the Baltics by becoming the first Irish side to overcome a two-goal deficit in Europe.

Derry fans traveled in numbers with around 300 making their presence felt among the 3,450 spectators at Skonto Stadium.

It was a brave effort from Ruaidhri Higgins’ side who could so easily have slipped past for a dominant first half hour.

Cameron McJannet had a clear effort from the line before James Akintunde came awfully close to finding the net when he deflected his shot after being clean on goal.

Will Patching hit the woodwork in the second half but the damage was done by the Brazilian.

Derry was opened up on the left flank and when the ball was brought back towards the penalty spot, Ramos was in acres of space and ruthlessly found the net in the 33rd minute.

Riga gained confidence as the game progressed and the tie was over when Ramos broke down the left before shooting past Brian Maher in the 77th minute.

Derry’s European adventure ended at the first hurdle. Higgins made three changes from the team that lost in the first leg. Two of those were enforced with Matty Smith, who was red-carded in the second half, suspended and Ronan Boyce injured.

In came Danny Lafferty, Brandon Kavanagh and James Akintunde, the latter replacing Jamie McGonigle who fell to the bench.

The big news, however, was the return of winger Michael Duffy, to the bench for the first time since fracturing his shin on his second City debut against Drogheda on March 14.

There was a heavy downpour just before kick-off and Derry started kicking the ball hard on the slippery surface.

When McJannet burst in from midfield, he did a superb job of forcing a corner in four minutes. Patching’s first corner was cleared behind but his second was swung towards the back post where McJannet was awarded a throw-in but he was cleared off the line by the Riga defence.

It was an encouraging spell from the Candystripes and they came awfully close to taking the lead in the 17th minute.

Kavaagh split the Riga defense with a fine threaded pass down the middle to find Akintunde behind. The striker took a throw-in before heading his shot just wide of the far post with the keeper beaten.

Riga broke the deadlock in the 33rd minute and it was a real punch for Derry who had been on top for the first half hour.

Riga overloaded Derry’s left side and when Glody Ngonda, who was involved in that red card incident with Smith in the first leg, cut him off from the touchline, dangerman Ramos shot clinically into the back of the net at 12 meters.

Kavanagh almost found the target moments later when he was gifted with possession by a sloppy defensive pass, but his well-hit effort from distance narrowly sailed.

At the other end, Riga made the break and when substitute Mikael Soisalo got behind the Derry defense despite suspicion of offside, Brian Maher made a terrific save with his leg stretched out at his near post.

Derry was living dangerously early in the second half as Ramos slotted too easily behind the defense from the left flank. Twice Derry managed to eliminate the danger but they flirted with disaster.

Derry created his own chance in the 58th minute after a fine build-up involving Dummigan that found Lafferty in space on the left. The City winger showed great composure to spot Patching in space just inside the penalty area, but the Mancunian’s superb strike hit the top of the crossbar and went past above.

City boss Higgins made a double substitution in the 73rd minute which was well received by the traveling support as Duffy made his long-awaited return alongside new signing Ryan Graydon. 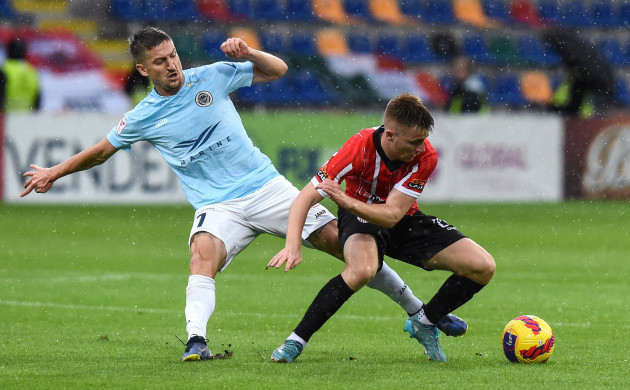 Brandon Kavanagh from Derry with Yurii Vakulko from Riga.

Just four minutes later, the tie was dead and buried for Derry as Riga hit the counter.

Ramos played a neat brace with Douglas Aurelio and the former ran towards goal, touched his right foot before burying his shot past Maher in the far corner.

It was the end of the road for Derry who will take away some crumbs of comfort from this first half against a quality Riga outfit.