Leicester and PSV played out an entertaining goalless draw at the King Power Stadium to leave their Europa Conference League quarter-final well prepared ahead of next week’s second leg.

Harvey Barnes had Leicester’s best chance of the game at the end of the first half, but his thunderous drive hit the bar as Brendan Rodgers’ side missed a narrow lead in Thursday’s second leg in the Netherlands -Low.

PSV, with 2014 World Cup winner Mario Gotze, started brilliantly and went close when the German was played on goal after breaking the offside trap at only the second minute, to see his effort thwarted by the tense Kasper. Schmeichel.

Man of the match: Kiernan Dewsbury-Hall.

Leicester then grew in the game and had their own chance to move past, but Kelechi Iheanacho chipped the ball in the 20th minute with only PSV goalkeeper Yvon Mvogo to beat.

Barnes then hit the woodwork for the hosts just before the interval when he played a quick one-two with Iheanacho in the penalty area before seeing his powerful strike cannon roll back from the crossbar.

Five minutes into the second half, huge pleas from PSV fans were ignored by referee Ivan Kruzliak when Cody Gakpo appeared to have been caught by Ricardo Pereira but with no VAR in operation, the match remained without goal.

Leicester struggled to create clean chances after the break and the game fell through, with both sides perhaps fearful of remaining level ahead of next Thursday’s second leg at Philips Stadion. The winner will face Roma or Bodo/Glimt in the last four, with the Norwegian team leading the draw 2-1.

Leicester manager Brendan Rodgers has made two changes to the squad which started the 1-1 draw with Manchester United in the Premier League last weekend.

Ricardo Pereira and Marc Albrighton have replaced James Justin and Nampalys Mendy in the starting lineup.

Rodgers: We can win in Holland 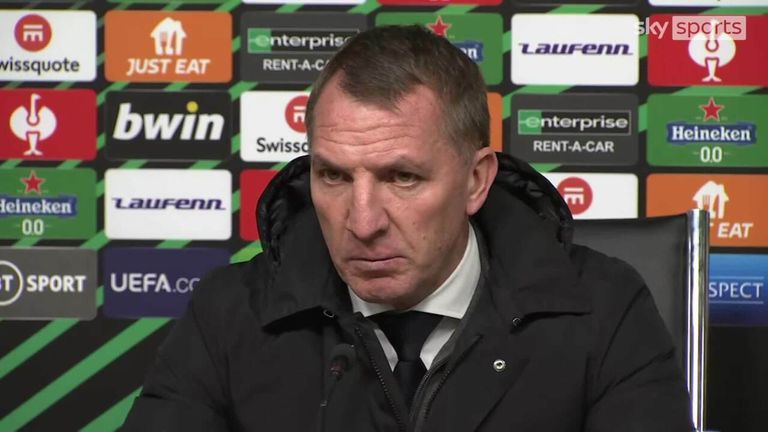 “We’ve shown enough and seen enough to know we can go out there and win,” he said.

“Anyway, it was always going to be close. You would love to win it, but it didn’t have to be.

“We’ve shown our resilience defensively and we’ll go there with enough hope that they will probably open up a bit more which will give us a bit more space.

“It’s finely balanced, I think it was a good game. PSV were a bit more closed off than normal, so space was limited, but other than their early luck, we defended pretty well.

“We had the two best chances of the game. There weren’t too many chances but that’s what you expect at this point in the competition.

“With a little more finesse and precision in our passes, we could have opened the scoring. We are still well placed.”

Schmidt: It was a clear penalty

PSV wanted a penalty when Pereira slipped and clipped Gakpo early in the second half but, without VAR, their protests were rebuffed.

PSV boss Roger Schmidt said: “I saw it, it was a clear penalty. I’m not a big fan of VAR so I can’t complain. It was a penalty, but that’s part of football where the referees make bad decisions.

“We accept it and we have to focus on next week. We played a very good game. We had to suffer sometimes, but we played against a very good opponent.

“Overall I’m very happy with the performance. In the first half we had some good balls, but in the transitions we weren’t quick enough to be available for forward passes.”

“Brendan Rodgers admitted he didn’t even know what the Europa Conference League was when Leicester entered the competition in December, but with his side just three games away from their first European final, he takes it seriously. .

“He named the strongest possible line-up with talisman Jamie Vardy still out through injury, and Thursday night’s impressive performance against a dangerous PSV side highlighted Leicester’s recent upturn in form.

“Despite remaining in 10th place in the Premier League in a disappointing domestic season, the Foxes have recorded six wins and two draws in 11 games in all competitions. They are now unbeaten in seven matches at the King Power. Stadium, with their last defeat against Tottenham on January 19.

“They faced a PSV side who are now unbeaten in 14 games and just four points behind Erik ten Hag’s Ajax in the Eredivisie title race. The Dutch giants, who won the UEFA Cup in 1978 and the European Cup 10 years later, are competing in Europe for the 48th consecutive campaign. This is Leicester’s sixth season playing continental football.

“Leicester’s last European quarter-final was the 2017 Champions League tie with Atletico Madrid. Despite competing with Europe’s top flight five years ago and retiring early from the Europa League this campaign, a first European final in the club’s history is now firmly in sight.

“If they manage to pass what will undoubtedly be a tricky test in the Netherlands next week, they will face Bodo/Glimt or Jose Mourinho’s Roma in the semi-finals. With Marseille, PAOK Salonika, Feyenoord or Slavia Prague, the other remaining players in the competition teams, last season’s FA Cup winners will be confident of going all the way.”

What’s next for Leicester?

Leicester return to the Premier League on Sunday hosting Crystal Palace; kick off at 2 p.m. The Europa Conference League quarter-final second leg against PSV will take place on April 14; kick off at 5:45 p.m.

Brendan Rodgers’ side will then travel to Newcastle three days later great sundaylive of Sky Sports Premier League; kick off at 2:15 p.m.