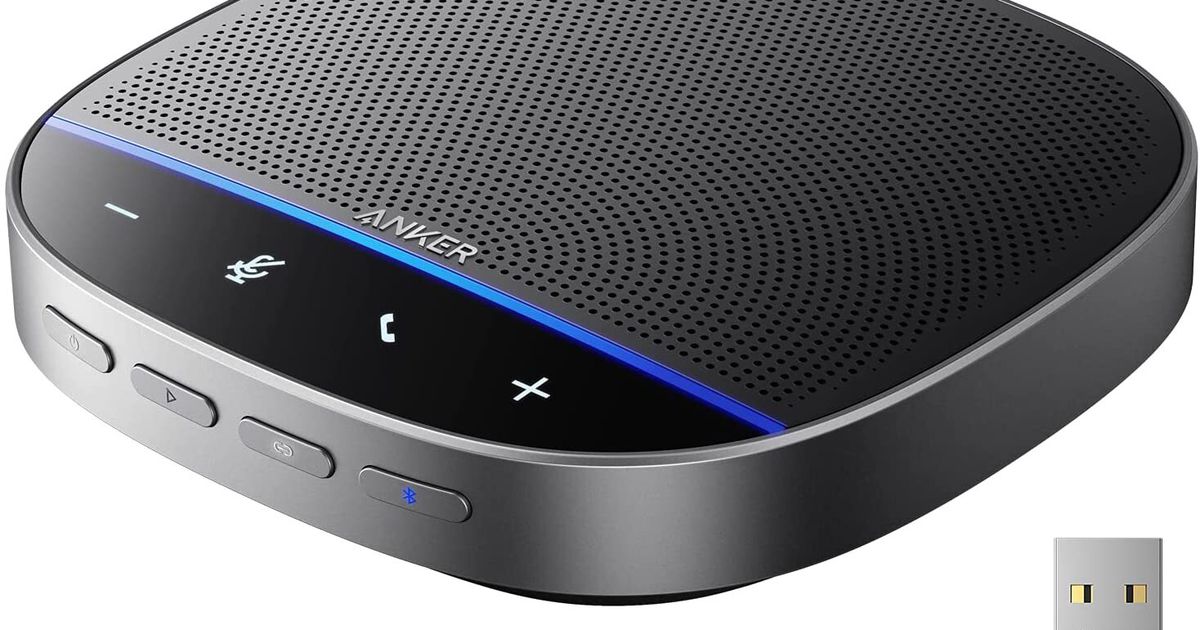 In my office, we’ve switched our desk phones to Microsoft Teams, which means all of our phone calls use the internet instead of traditional phone lines.

This type of system is known as VoIP or VOIP.

Some people have VOIP phones on their desks, while others (including me) use wireless headsets connected to their PCs via Bluetooth to talk on the phone.

Still, there are times when a speakerphone would come in handy, such as in a conference room or a small meeting.

For those situations, the AnkerWork PowerConf S500 speakerphone ($ 219.99) can clearly pick up the voices of everyone around the table.

AnkerWork is a new line of products from Anker for people working from home.

The S500 is not a real phone. It is a microphone / speaker that connects to a smartphone, tablet or computer.

I have reviewed many bluetooth music speakers that offer the same speakerphone function, but they are limited in their voice quality and connections.

The PowerConf S500 is specially designed for voice quality and has several ways to connect to your devices.

The S500 has a set of four MEMS microphones spaced apart to capture 360 ​​degrees of conversation. You can place it in the middle of a table and everyone’s voice can be heard clearly.

It is equipped with VoiceRadar technology. Anker says he uses “improved, beamforming digital signal processors to pick up the speaker’s voice while ignoring surrounding noise to ensure a great sound experience for all parties.”

Anker says the speaker is sized appropriately for a meeting for up to 12 people, but if you have a large meeting (or a really long conference table), you can pair two S500s for more coverage.

It uses a 32 kilohertz Ultra-HD voice codec and customizable voice tracking modes that include 360 ​​degree, Solo, and live streaming.

The S500 can be used wired, via USB-C cable, or wirelessly via Bluetooth.

Phones, tablets and laptops have built-in Bluetooth, so you can just press the pairing button on the S500 and connect.

If you’re using a desktop computer that doesn’t have Bluetooth, Anker includes a Bluetooth dongle so you can just plug in and play. The dongle is pre-paired to the speaker.

When the S500 is connected via Bluetooth or the USB cable, it will just show up as another option in your speaker and microphone options.

The S500 has a rechargeable battery that can last up to 16 hours of call time, but if you have the speaker connected to your computer via USB, it will be powered by this source.

I can see this is invaluable for someone who travels a lot on business. Throw the S500 in a bag and you’re ready for conference calls in almost any situation. The speaker comes with a very nice semi-rigid zippered case.

The S500 has four buttons along the front edge for power, play / pause, connect to another S500, and Bluetooth pairing.

There are also four programmable buttons on the top to increase and decrease the volume, mute the sound, and answer calls.

Mute is the button I use most often, and when you press mute on the S500, the button turns red along with a light strip across the width of the speaker. Everyone around the table should be able to see the mute status quite easily.

Anker has a new app called Anker Work to help you log in and change speaking modes.

You can also check the battery level, update the firmware, turn off the speaker and change its volume from the app. The app also allows you to turn off the LED light bar.

The Anker Work app also has a help section if you need a refresher on how everything works.

The app also has a device test feature that lets you record a phrase or two and play it back so you can hear your sound. The test screen can also play a melody through the speaker so you can check the volume levels.

I’ve started looking at desktop gadgets in a different way since the pandemic. Many of us were brutally sent home last year and told to open a home office.

If your business has a large IT staff, you might have been lucky enough to get some help, but a lot of people have suddenly become their own IT department.

The devices you choose to help you stay connected to the office are important.

The Anker PowerConf S500 is a good speaker at a competitive price. It has all the connection methods you could possibly need for any situation, and the sound won’t disappoint.

I made test calls to my wife and asked her to rate the sound quality on a scale of 1 to 10. She said it was a 10, and I learned not to argue with her. my wife.

At the end of the line : A strong performer who passes my wife’s voice quality test.