When a Park City, Utah owner came up with a plan to upgrade his home with a unique new versatile home theater, he called on local integration company Erskine Group to come up with designs that would stand out from the crowd. the crowd.

The client’s top priority was the conversion of a recreation room into a brand new state-of-the-art home theater that could also serve as a musical space where he could plug in his bass guitar and play along to his favorite songs, as well. than a place to join business meetings by videoconference.

The group also knew where to start when planning the installation, as the owner immediately requested a Meridian system after taking advantage of the speakers at his other New York property.

“We understood our customers’ affinity with Meridian and were excited to show what the brand can do in this ambitious project,” says Dennis Erskine of Erskine Group. “We took on a project management role for the entire construction with the ambition to create a ten-seat playoff theater in the 29-foot-8-by-24-foot-8-inch space. Our first task was to remove the existing garage door that was in the recreation room and finish the exterior to match the architecture of the house.

At this end of the room, Erskine Group used two-thirds of the room’s width for the equipment / screening room. The remaining third now includes cupboards, a sink and a refrigerator. The four-inch folding doors conceal the wet bar, prevent refrigerator noise from “leaking” into the room, and provide space for acoustic treatment in that important corner of the room.

Using two Meridian 271 digital theater controllers, Erskine Group transferred the digital signal from the Trinnov Altitude 32 processor to a QSC Q-Sys ecosystem (still in the digital realm) and then to the Meridian speakers. Digital to analog conversions have taken place in the speakers to provide the highest resolution playback. 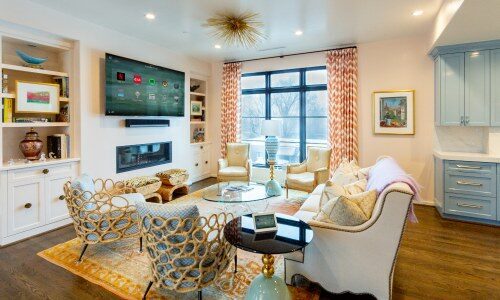 The full space specification includes four subwoofers and amplification, a Barco Loki 4K projector on a Display Technologies vertical projector mount, and a projection screen from Stewart Filmscreen. Sources of content in the room include a Blu-ray player, DishTV, Apple TV, and Kaleidescape, all controlled through a Crestron system. Quest Acoustical Interiors acoustic treatments were applied behind the fabric on the walls to further optimize performance.

The integrator configured the system so that the customer could play his bass alongside the music videos, Roon and his karaoke player without any latency issues. In addition, USB and HDMI ports are installed in the seats so that he can connect his laptop and organize a video meeting via the audiovisual installation in the room.